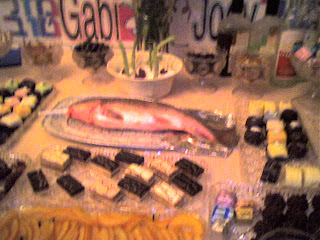 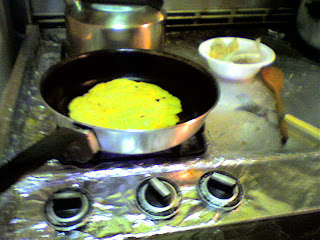 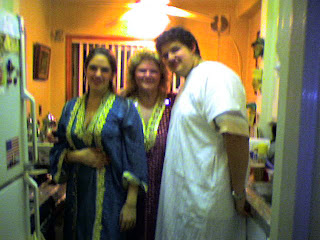 My younger son and I were invited to a Mimouna party at the Azoulay home - Mimouna is a sephardic tradition, celebrating the end of pesach ( http://en.wikipedia.org/wiki/Mimouna )- and what a wonderful celebration it was. There are traditional foods served, mofleta and birkooks. Mofleta is a delicious yeasted quick bread - it has to be quick since the preparation can't begin until pesach is over - The Azoulay women, looking beautiful in their traditional Moroccan clothing, made the dough starting with five pounds of flour, and spent hours lovingly rolling, flattening, and cooking the flat breads.
When we walked into the house at about 11pm, the intense smells of yeast and butter, after 8 days of matzah, were intoxicating. And the taste of the mofleta, coated with butter and honey was amazing. Bread in any form is a particular weakness for me, but warm, chewy yeasty bread after a week of matzah - sigh......
The table was set with traditional foods, and before I could even taste the mofleta, I had been handed a bowl of birkooks, a porridge made from tiny pasta, cooked in milk and butter, with a bit of salt, sprinkled with cinnamon - the flavors all combining into a wonderful creamy flavor. I had just spent several hours "un-pesach-ing" my own kitchen, and hadn't realized how hungry I was until this warm creamy porridge was there satisfying me!
I was told that all the foods on the table were traditional, and held significance - even the fish smoking a cigarette! The fish signifies life, common to many cultures, and the cigarette in its mouth indicated it was Moroccan!
Posted by Debra at 10:46 AM