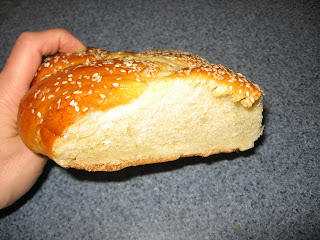 I got it. A little reading, a little tinkering and this shabbat's result elicited the comment "you got it, Mom!". That's about the highest praise I can receive.
We were happy with the taste of the recipe after my last adjustment, but the outer consistency was still a problem. As far as we're concerned, crusty is not a description for challah that we want to eat. So in an attempt to alleviate the overdone bottom problem, I put a pan of hot water under the baking challahs - and voila!
This recipe is simple, requires less than half an hour of "working" time, and if you think putting a home made meal in front of your family is satisfying, just see how satisfying it is to say "hamotzi" on challahs you've baked yourself.

Place all ingredients in the bowl of a mixer, with the dough hook attached. Start the mixer on the lowest speed, and once all of the flour has been incorporated, turn it up to medium high speed and let the mixer go for ten minutes.

Put the prepared dough into a large, lightly oiled bowl and cover with a clean dish towel. The dough will be quite sticky. Place in a warm place (the counter near the pot of chicken soup lightly bubbling on the stove is an ideal spot) and let rise until doubled in bulk - about two hours. Lightly press down and let rise again for about an hour. Lightly press down again, then divide the dough into 3 or 4 equal portions, depending on whether you want 3 large or 4 medium challahs. Divide each portion into 3 portions, shape each into a long snake and braid.

Preheat oven to 350 degrees. Put a large jelly roll pan on the lowest baking rack and fill with boiling water once it's on the rack.

Brush challahs with beaten egg, and, if desired, sprinkle with poppy seeds, sesame seeds or salt.

I got a big "thumbs up" from my favorite celiac when I used this recipe to make dreidel shaped sugar cookies sprinkled with beautiful blue sugar for a family chanukah party. The dough was easy to roll, and the cookies tasted great.
GF Sugar Cookies
2/3 cup shortening
3/4 cup sugar
1 teaspoon vanilla
1 egg
4 teaspoons milk (or GF pareve milk substitute)
2 cups GF flour
1/2 teaspoon salt
1 teaspoon xanthan gum
Cream together shortening, sugar and vanilla on medium speed for three minutes. Beat in egg and milk for one minute. Stir together flour, salt and xanthan gum. Stir into creamed mixture. Chill dough for one hour.
Preheat oven to 375 degrees.
Roll dough about 1/4 inch thick (not too thin!). Use a little GF flour on rolling pin if needed. Cut with cookie cutters, decorate with sugar or sprinkles if desired. Bake 6 - 8 minutes.
Cool on rack.
Enjoy!
Posted by Debra at 11:14 AM No comments:

How many times have you eaten a soggy, mushy latke? Or one that was burnt on the outside and raw on the inside? Or heated up frozen latkes because the idea of frying was just too much for you? Well, I can assure you that frying is not difficult, need not be messy, and once you’ve mastered it, you will never reach for a bag of Kineret latkes again.

Quantity of Oil: There should be about three-quarters of an inch of oil in your frying pan. Really. Take a ruler and see how deep that is. If you fry at the correct temperature (keep reading), you will find that most of the oil will still be in the pan when you’re done. The oil should be deep enough to cook the entire bottom of the latke.

1 small onions (or a larger one, to taste)

Note: This recipe doubles well, but after frying the first half, start with fresh oil for frying.